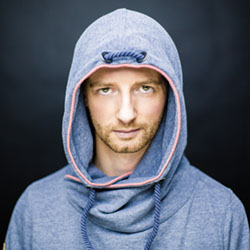 With a broad selection of veterans and new talents, Felix will deliver 60 Minutes of nothing but straight Techno to your soundsystem, every week from now on! "I've been receiving so many mails and requests from international fans of my show, that it was just the natural step. Becoming a part of the global techno movement feels great!" Felix said.

Biography:
His name is synonymous with Techno made in Germany.
His mix style is surgically precise, energizing the music into what seems like perpetual motion.
What makes his sound outstanding is that it moves the masses without overwhelming them, drawing its strength from the lightest of touches.
The effortlessness with which Felix Kröcher masters his craft has made him a leading figure for a new generation of DJs.
Felix grew up to the sound of Frankfurt, the city he was born in 1983. Whilst other kids were more interested in bikes or computers, Felix acquired his first decks at the age of 10 and played his first gigs in public at 16.
Meanwhile Events like Mayday, TimeWarp, Nature One, Wire, Creamfields, Urban Art Forms, SonneMondSterne, Free Your Mind, Mysteryland, Awakenings of Moving City are permanent dates in his approximately annual 130 Gigs.

Felix Kröcher does not only play music. He lives and celebrates music and casts a spell over everyone. Because he is an artist as well as an entertainer with a great heart and a great portion of lifeblood. And this lifeblood comes to light all over again with each set.

Techno from Germany has a long-standing tradition and many faces. One of its most famous is FELIX KROECHER from Frankfurt. Despite only being 30 years old, he helped shape electronic music since the mid 00 years. With his very own interpretation of techno he presents the zeitgeist in a way that does not care about trend but prefers to create new ones. His dance floor sound – first presented at the legendary U60311 in his home town – is alive at the really big festivals and the most famous clubs.

Events on German soil such as Time Warp, SonneMondSterne, NATURE ONE and MAYDAY are his constant hosts. FELIX KROECHER also has frequent appearances at large international events such as the WIRE festival in Japan, the Nocturnal in the USA, Urban Art Forms and RaveOnSnow in Austria or Awakenings and Amsterdam Dance Event in the Netherlands. His success shows that he is right: he enjoys a growing fan base around the globe. It’s not only since the release of his highly-acclaimed album “LÄUFT” in 2011 and the subsequent world tour that the name FELIX KROECHER stands for high-quality techno made in Germany. Previous releases such as “The Live Collection” (2007), the longplay debut “Connected” (2008) and the compilation “DISCOVER” (2010) garnered a lot of attention.

Moreover, FELIX KROECHER has reached a lot of listeners with his own radio show at Germany’s most important channel for electronic music Sunshine Live since 2004. This is where he doesn’t only present his own work but also the latest and greatest from the widespread field of techno releases every Wednesday evening. For a few months, Felix has hosted another radio show that reaches 30 international radio stations around the globe, growing.

FELIX KROECHER stands for lived out techno with a special feeling and a large portion of passion. He is an artist with a keen sense of vibes and upcoming trends and thus a true master of his trade. Both his broad musical know-how and his friendly personality make him a true magnet for the audience and gained him numerous top positions in the yearly votings of pertinent medias within the scene. You will certainly continue to hear a lot from FELIX KROECHER when it comes to fresh, long-lasting and high-quality techno.